If you spend a good part of your day, week or month online (which you probably do if you’re reading this), you’ve probably heard of the term  ‘buzzword’.
In case you haven't, here’s Google’s breakdown on it. (No judgment. It’ll be our little secret).

/ˈbʌzwəːd/
nounINFORMAL
Buzzwords have had skeptics raise the odd eyebrow. And rightfully so. The algorithmic beasts have a way of sneaking FOMO up on us like a ninja so stealthy that by the time we’ve realized we might have wasted precious time and energy on something that's completely irrelevant 48 hours later, we’re already beating ourselves up for falling for that s***.
Again.
Time and energy that would have been much better spent practising, getting mentored, or working out instead.
But not all buzzwords are fluff.
Here are 5 that have proven themselves to be more than just lame clickbait.

Being ‘true to yourself', while a cliche, is as legit as it is cheesy (#dichotomy).
For musicians especially, it can be a particularly rough ride.
Finding your true voice at your instrument, integrating it with your artistic profile in a manner that feels right to you, but is also accessible to the audiences you want to reach. And all of this navigating the labyrinth of naysayers, gatekeepers, predators, and curious peers.
Phew. No pressure.
The connection between one’s own vision and that of their authentic artistic self is the very food your soul will need for nourishment while navigating the jungle that is the music industry.
Without a clear idea of what authenticity means to you, presenting your work to your environment in the long haul sustainably, is a little unrealistic.
Risks: Committing to an unripe idea of authenticity too soon.
Gains: Once made peace with, can be a reliable compass.

I struggled with this one for a bit due to a specific brand of its overuse in certain circles before I figured out a way to reclaim the word for myself.
The way I look at it, alignment is the integration of the internal with the external. Here are a few examples:
The scary truth is that a vision, roadmap, or even a lifestyle minus the alignment between themselves is a foolproof shortcut to failure. Which in itself is not the worst thing in the world, per se (and probably a good topic for another post?). But a little tiring. And potentially demoralizing (to the point of being self-destructive) once established as a repetitive pattern.
So yeah. Alignment is for keeps.
Risks: Oscillating between being too cerebral or too vague in defining what alignment means to you.
Gains: Balance.

Cringing yet?
Took me a while before I could bring myself not to, every time I’d read that word.
From gigs that don't pay to crappy collabs,  dysfunctional work ethics to toxic break-ups (heck I recorded an entire album on it!). Too many things that are an unnecessary drain on creative energy tend to get justified with the word 'growth' to cover up for holes that might actually need attention. So it's imperative to set the record straight.
Here's an analogy I use:
A muscle gets a little destroyed when exerted. And the recovery it does on its own right after, is what makes it stronger, bigger, and/or leaner.
Do it right = you just did a workout.
Do it wrong = it’s a possible injury.
And keep getting those injuries often enough = you’re f’d.
It's really kinda as simple(ish) as that.
If that workout analogy is too vague for you though, here’s another rule-of-thumb that might help.
Don’t make growth a destination.
Concentrate on getting the process right. A natural bi-product of the same will be growth by default.
Risks: Wastage of resources into the wrong channels.
Gains: Growth is the gain.

There’s lots to unpack here. Some of it is tricky to comment on as a straight male and the privileges that come with it in the current zeitgeist. But what the heck here goes.
We’re living in the aftermath of extended eras of systems ridiculously past their expiry date. Systems that have enabled a list of some pretty f'd up s*** like patriarchy, racism, hidden oppression, and the likes.
Eras so stunningly out of balance that resetting the system feels like a near-impossible task at times. One where discerning between baby and bathwater is a little more complex than meets the eye.
Vulnerability is easily played imposter by ‘venting sprees’ and ‘victimhood’. The line is one so fine that it takes a little bit of real-life practice and support in the current zeitgeist to figure out our individual relationship with it and how we really feel comfortable expressing it meaningfully.
Most importantly though, contrary to what Lord Algorithm can have us believe, there is no one-size version of it.
My two pence on this buzzword is this:
Vulnerability is something to celebrate and honor. As is its inherent nakedness.
But it's crucial to remember that just like nudity in the physical realm, the lines between true, intimate, and meaningful vulnerability and hedonistic blatancy can blur very quickly.
Risks: Overstepping boundaries, playing victim, feeling exposed in spaces not safe or appropriate.
Gains: Deep Empowerment. Freeing oneself from patriarchal sticks up the butt and possible residue of stale machismo.

Contrary to what a lot of us might believe, this one’s actually been around longer than we realize. Albeit under the guise of more ambivalent cousins like ‘positive thinking’ and ‘mental focus’, just to name a few.
Personally, this is a buzzword I actually thank the mainstream for, for embracing it the way it has.
(Heck I even have a FREE course for songwriters with it in the title). And I’d like to bet it’s here to stay.
Medically reviewed blog verywellmind.com defines mindset as '..a set of beliefs that shape how you make sense of the world and yourself. It influences how you think, feel, and behave in any given situation.’ ​​
It’s that last part I particularly resonate with the most. I find it empowering.
It's a reminder that no matter what the circumstances, the manner in which we respond to them is always a choice.
This is powerful. And a potential game-changer for musicians and artists.
The way we sound. The art we put out. The trajectory our careers take. We actually do get to play an active role in it!
And while not a linear process, wrapping our heads around this fundamental fact can be an incredibly healing experience.
Risks: Overthinking and subscribing to someone else’s definition of the ‘right’ mindset.
Gains: Clarity and focus.

The internet and its trendsetting powers are here to stay. And while getting hip to its lingo as a full-time vocation is a debatable usage of time, embracing the education hidden behind the onslaught of its hashtags can be a more meaningful experience than we often give it credit for. To make a martial arts reference I love, the idea is to focus on the moon. Not the finger pointing at it. 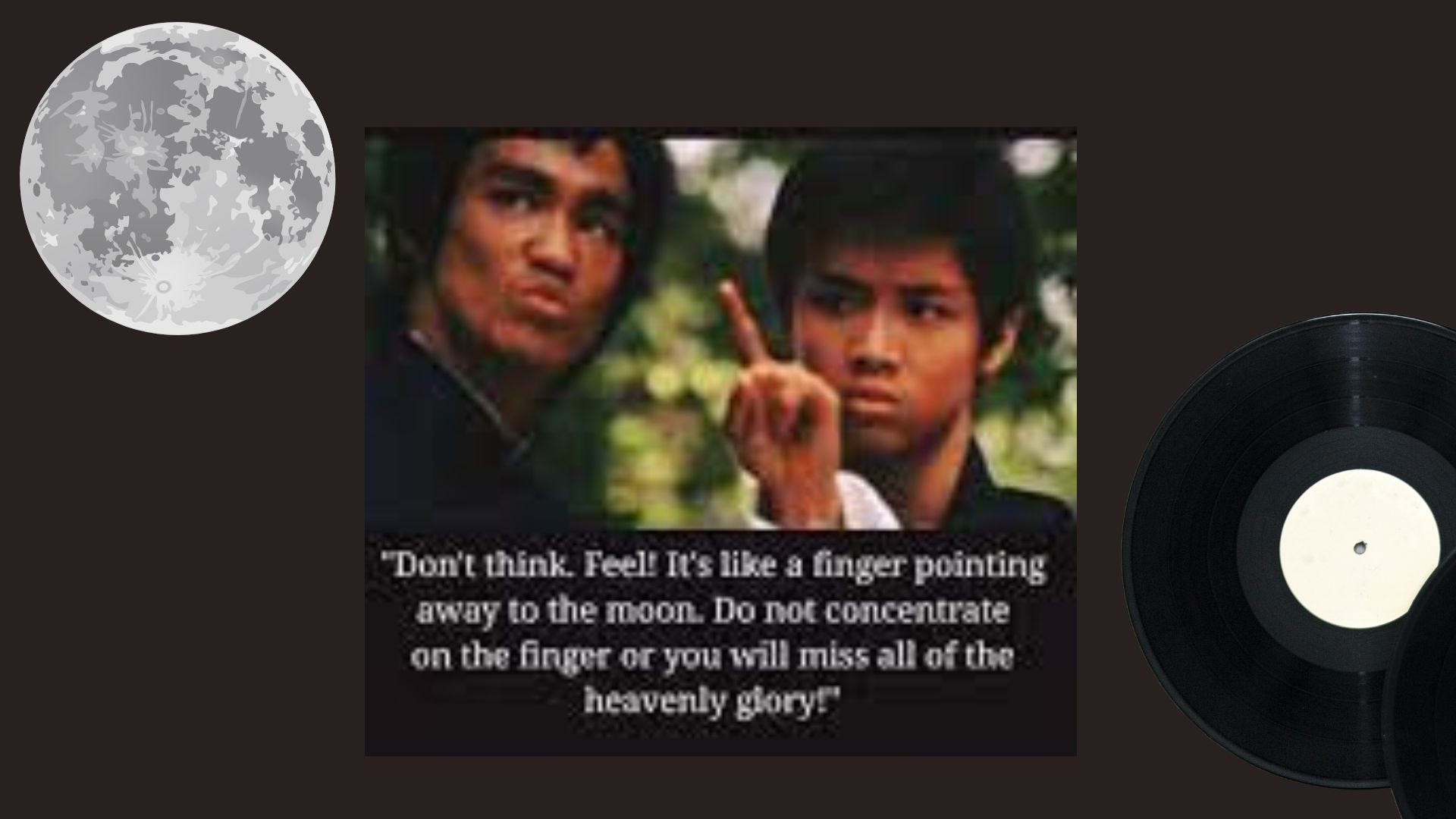 Book a FREE Consulting Session at the Holistic Musician Academy 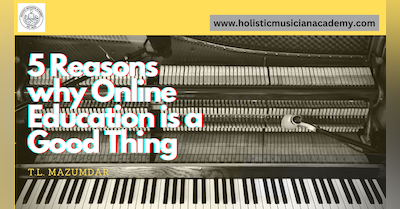 5 Reasons Why Online Music Education is a Good thing 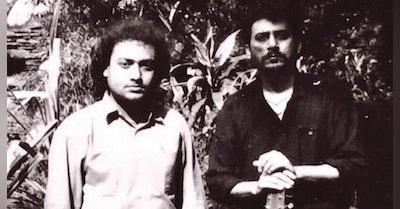